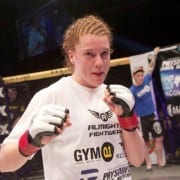 England’s Laura Howarth (2-1) is the latest fighter to sign with the promotion.

“Signing for Invicta was always going to happen, it was simply a question of time until I made it,” said the British fighter. “I’m really excited to show the Invicta fans what I can really do. I feel energized, focused and ready to lay the mother of all beatings on some Invicta fighters.”

Training out of GYM01 in Portsmouth, Howarth is a veteran of The Ultimate Fighter 18 and has compiled an unblemished kickboxing record in addition to her work in the cage. “Hot Head” will quickly look to make her mark on the 135-pound division in 2015.

“I set goals and I always achieve them,” she declared. “I honestly believe it is only a matter of time before the 135-pound belt is strapped around my waist.

“So for all the 135-pounders out there who think they can beat me, please step up. I’m coming for the belt and no one will stop me from taking it.”