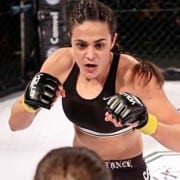 Rey, who hails from Balneario Camboriu, Santa Catarina, Brazil, has finished all six of her professional outings, including a nine-second knockout over Natali Alves. Five of her six wins have come inside the first round.

“I am super excited. I always wanted to fight for Invicta and now I can do it,” said the fighter. “I always give it all in my fights and always look for the KO. I will bring it to the Invicta cage for sure!”

A product of Astra Fight Team, Rey will be debuting for the promotion as a flyweight. Although she’s yet to step foot in the Invicta cage, she’s already got a message for the rest of the women in the 125-pound division.

“Run to the mountains, Claudia Rey is coming after each one of you!,” she declared.