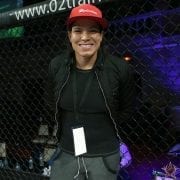 Nunes will join a team tasked with further solidifying the deepest roster in women’s MMA. The agreement’s core responsibilities will include assisting with the matchmaking process to create compelling fight cards and identifying the champions of tomorrow, specifically scouting talent in Brazil and the southeastern United States.

“I’ve known and worked with Amanda for a long time, going all the way back to our Strikeforce days,” said Invicta FC President Knapp. “She was already part of the Invicta family, but now it’s official; now it’s on paper.

“I can’t think of a better ambassador for the sport and our organization.”

“I’ve been very fortunate throughout my career to fight for the best organizations in the world,” said Nunes. “In my new position, I hope to be able to use my experience as a fighter and a champion to help groom the next generation. I’m honored to be a part of their journey at Invicta.”

The appointment is effective immediately. In her first official duty, “The Lioness” will be front and center tomorrow, overseeing the athletes of Invicta FC 27 as they weigh in and square off.

Phoenix Series 2: Get to Know the Fighters Competing for Tournament Glory
4 replies