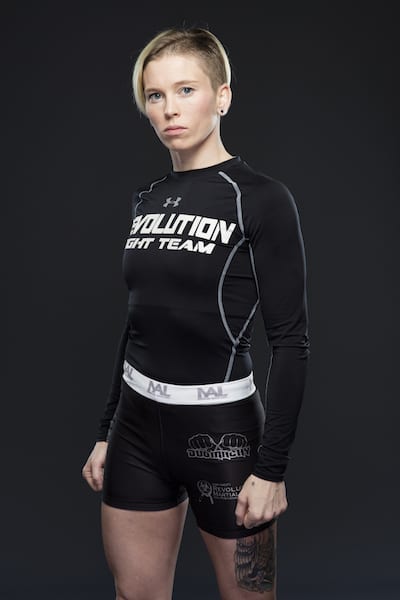 WHAT MOTIVATES YOU AS A FIGHTER
Being surrounded by all my teammates & coaches motivates me as a fighter. Everyone works extremely hard and we push our limits daily. Seeing our guys & girls hitting the top level promotions like UFC, WSOF, Legacy, Invicta drives me to be the best and work harder each time. Learning never stops and to see the fire that our fighters have to be better everyday makes it easy for me to stay focused and be the best training partner I can be for them and the best version of me possible.

WHAT GOT YOU INTO MARTIAL ARTS?
I got into Martial Arts all because of my husband/ pro fighter Allen Greenway. He inspires me everyday. Watching him & learning from him for the past 13yrs inspired me to go after whatever I wanted. He is one of the hardest working people I have ever known and he is the one who pushed me into trying my first class, after that I was hooked. We owned our own gym for 9yrs. And had huge success during that time. Back in May 2015 we decided to make the hardest decision we have ever had to make and sell our gym in North Carolina and make the move to South Carolina to Revolution MMA. It was the best decision we could have ever made. Although it was very hard for our family we have never been more happy with where we are.

WHAT PROFESSION OTHER THAN YOUR OWN WOULD YOU LIKE TO ATTEMPT AND WHY?
If I had the chance to try another profession it would be performing on Broadway. It was always a dream of mine that I never pursued.

DO YOU HAVE ANY HIDDEN TALENTS?
A lot of people don’t know this about me, but I had a full vocal performance scholarship to college and I dropped out after a year. I can sing Disney and Broadway music like no other.

IF YOU COULD BE ANY FICTIONAL CHARACTER, WHO WOULD YOU CHOOSE AND WHY?
If I could be any fictional character it would hands down be Tank Girl. Everyone says I look like her anyways. She is fierce and takes nothing from no one. She sets out on missions from her tank to seek and destroy. Bold with a big attitude. A little rough around the edge but will do what she needs to do so save the world.