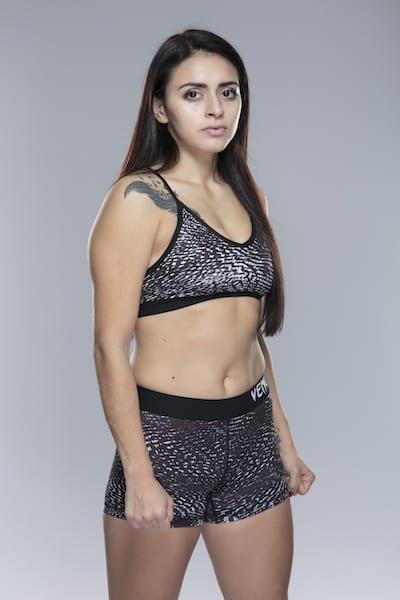 WHAT IS A TYPICAL DAY OF TRAINING LIKE?
A typical day of training for me consist of getting up early and starting my day of with a nice long run. I try to run 5 miles a day minimum. Then I go into the gym and have my weight lifting session. After that we do at least an hour of drilling whether it be striking or grappling. I usually stretch for a good 30 mins and start on pad work with my coaches after that I usually do more drills and technique or go live and/or roll. On certain days, we usually spar.

WHAT MOTIVATES YOU AS A FIGHTER
As a fighter, what motivates me the most is just always trying to better myself. I love challenges and I love testing myself. Every time I get a new opponent I get excited because I have to find a way to beat them. Every fight is different; every fighter has different skills so I love to take on a new challenge. I feel like with every fight I learn a lot about myself. I think what keeps me motivated and what keeps me going is just not wanting to embarrass myself in the cage. I always want to be prepared even for the unexpected. My motivation is my family. I want to show my siblings that anything is possible if you give it your all. Nothing is impossible because there is always a way you just have to find it.

WHAT PROFESSION OTHER THAN YOUR OWN WOULD YOU LIKE TO ATTEMPT AND WHY?
I would like to attempt being a firefighter. I feel like they are so brave risking their lives for others. They are also very courageous. I can’t imagine having the guts to walk into a burning building. I can just imagine all that adrenaline rushing through their body as they are walking in and trying to put out a fire. Most importantly that feeling they get after they rescued people.

IF YOU COULD FIGHT ANYONE, LIVING OR DEAD, WHO WOULD YOU FIGHT AND WHY?
If I could fight anyone living or dead, I would love to fight Alexa Grasso just because I am a huge fan. I feel like she is an amazing fighter that has a lot to show. If I ever had the chance to fight her it would mean I have fought one of the best..

IF YOU COULD BE ANY FICTIONAL CHARACTER, WHO WOULD YOU CHOOSE AND WHY?
If I could be any fictional character I would be Tris Prior from the divergent series, the books not the movies. I feel like her character is so empowering. She didn’t let labels defy who she was. She faced a lot of obstacles but she was tough and had to adapt to many things. She never backed down and was so stubborn. I feel like her everyday life was fun. She would do so many things that not many people would be able to do. She stood up for so many people and fought against injustice. She gave her life to fight for what was right. I guess I want to be seen that way. I don’t let labels nor what people say defy who I am. No one made me into the fighter I am. I had to work hard to get to where I am at because I am stubborn just like her.