Atomweight champion Jinh Yu Frey (8-4) has been forced out of her scheduled title defense against No. 1 contender Ashley Cummins (7-4) due to injury. The bout will be rescheduled for Invicta FC 39.

Stepping into the main event spotlight will be the flyweight contest between Pearl Gonzalez (9-4) and Brogan “Killer Bee” Sanchez (6-0). The Chicago native Gonzalez is a UFC veteran and former flyweight title challenger. Guam’s Sanchez — formerly Walker — has opened her career with six straight victories, including two straight inside the Invicta cage.

In addition to the new headliner, a bantamweight bout has joined the fight card as Florida’s Megan “Killa” Cawley (0-1) returns to the Invicta cage against newcomer “Hurricane” Hope Chase (1-1) of Pennsylvania.

Invicta FC 37 takes place Friday, Oct. 4, from Memorial Hall in Kansas City, Kan. The event will stream live and exclusively on UFC Fight Pass beginning at 7 p.m. CT. Tickets for the event can be purchased now through Eventbrite.

The updated Invicta FC 37 fight card can be found below: 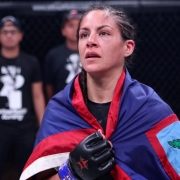