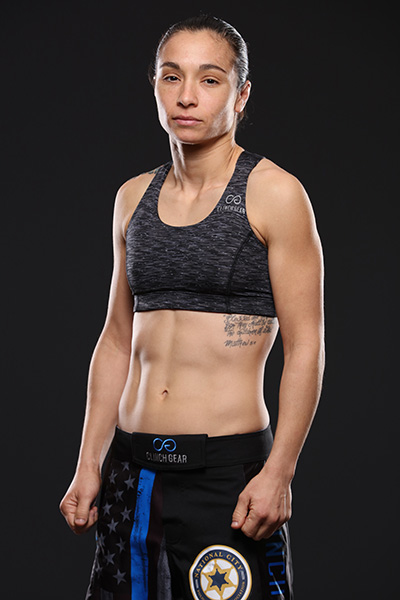 Nickname: Smashley
From: St. Louis, Missouri, USA
Fighting out of: San Diego, CA, USA
Team: 10th Planet San Diego Jiu Jitsu
Height: 5’3″
Weight: 105 pounds
Fight Record: Sherdog/Tapology
Bio: Unlike most fighters, Cummins may be safer in the cage than in her day job. The Missouri native works as a police officer and volunteers for St. Louis Pet Rescue on a regular basis. After going a perfect 8-0 as an amateur, Cummins turned pro in 2011. After scoring back-to-back wins to open her career, Cummins was signed to Invicta and competed at the promotion’s inaugural event in 2012. Since then, she’s faced a gauntlet of the strawweight division’s best, including Joanne Calderwood and Alexa Grasso. However, in 2015, Cummins revealed her plans to drop to atomweight.

“I knew all I wanted to do was fight. I was naturally just an aggressive athlete. I wanted to try mixed martial arts, so my sophomore year of college I gave up my soccer scholarship, in order to train full time. I fell in love with the sport immediately.”

WHEN AND WHY DID YOU START IN MMA?
I started training MMA in 2007. I wanted to challenge myself physically and mentally.

DID YOU PLAY ANY SPORTS AS A CHILD?
Growing up I did soccer, rugby and tae kwon do.

WHAT ARE YOUR HOBBIES AND INTERESTS OUTSIDE OF FIGHTING?
In my spare time I rescue stray and abused cats and dogs.

WHAT ARE YOUR THOUGHTS ON FIGHTING FOR INVICTA FC?
I am very honored to be fighting for the biggest WMMA organization and to be with some of the top fighters in the world.

WHEN FIGHT FANS HEAR YOUR NAME, WHAT DO YOU WANT THEM TO THINK AND REMEMBER?
I never gave up on my dreams and overcame adversity.