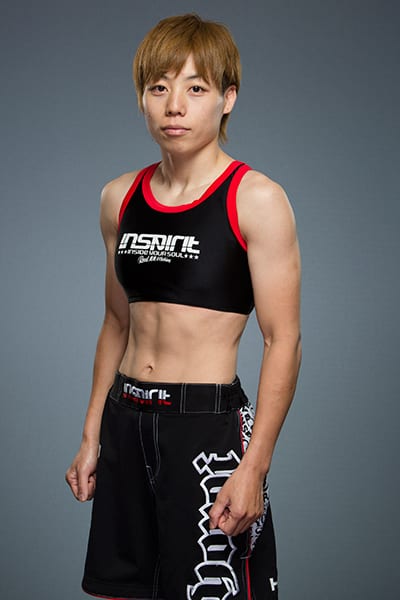 From: Sanyoonoda, Yamaguchi, Japan
Fighting out of: Ota, Tokyo, Japan
Team: Abe Ani Combat Club
Height: 5’2″
Weight: 105 pounds
Fight Record: Sherdog/Tapology
Bio: Hamasaki practiced judo from an early age, achieving the rank of second dan black belt before transitioning to MMA. She debuted in 2009 and captured the Jewels lightweight title in just her fourth pro fight. After extending her streak to seven straight wins, she debuted for Invicta at the promotion’s second event. Hamasaki submitted veteran Lacey Schuckman and quickly established herself as a potential title threat. However, after her only career setback against Claudia Gadelha at Invicta FC 6, the fighter dropped to atomweight. She stopped former Invicta title challenger Naho Sugiyama in her first bout at 105 pounds. In her promotional return at Invicta FC 13, Hamasaki edged Herica Tiburcio by decision to capture the Invicta atomweight championship.

“My goal is to promote women’s MMA more than anything else. I’d like to become an ambassador for this sport so that I can push for this sport’s success in both my home country of Japan and America.”