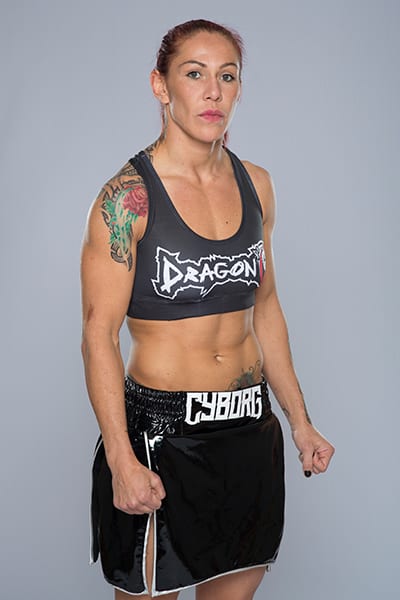 Nickname: Cyborg
From: Curitiba, Paraná, Brazil
Fighting out of: San Diego, California, USA
Team: Chute Boxe/The Arena
Height: 5’8″
Weight: 145 pounds
Bio: Long considered one of the greatest female mixed martial artists in the sport’s history, “Cyborg” entered the sport after initially playing handball. The Brazilian lost her first professional fight in 2005, but has spent the last decade laying a path of destruction unmatched by any woman before her. Justino has faced a who’s who during her career, stopping such notables as Marloes Coenen, Gina Carano and Shayna Baszler along the way. Cyborg joined the Invicta roster in 2013 and quickly established her dominance by demolishing Fiona Muxlow at Invicta FC 5. She captured Invicta gold at Invicta FC 6, battering the aforementioned Coenen in the process. The Brazilian defended her belt at Invicta FC 11 and Invicta FC 13, needing just 46 seconds to stop Charmaine Tweet and 45 seconds to stop Faith Van Duin, respectively.

“It doesn’t matter who I fight. This is my life. I train every day.”