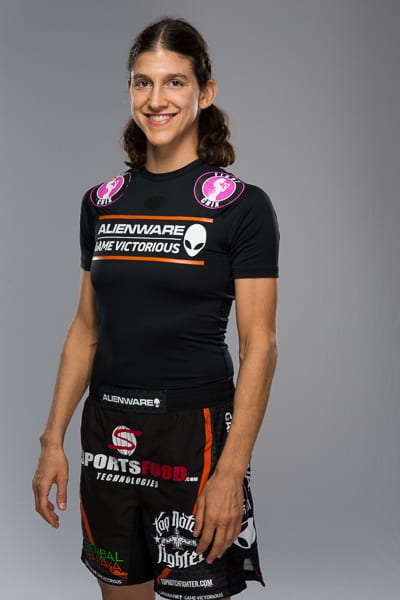 “I train because I love MMA, and I want to challenge myself. MMA is the ultimate challenge physically and mentally, and want to become stronger and stronger. When something hurts, I just smile and carry on because I don’t allow myself to forget my goals.”

WHAT IS A TYPICAL DAY OF TRAINING LIKE?
In the morning, I do a 30 minute mitt session with coach John Wood and then participate in team MMA practice. After that I go home and collapse from exhaustion. In the evening, I will either take the night off or doing yoga or lifting weights. When I’m not training, I’m either eating ice cream/froyo or watching Japanese anime.

WHAT GOT YOU INTO MARTIAL ARTS?
Initially, I started martial arts because I enjoyed seeing TV super heroes fight the bad guys. Then, I became motivated by the desire to get stronger and better in everything I do. I also excelled at academics, especially linguistics.

WHAT PROFESSION OTHER THAN YOUR OWN WOULD YOU LIKE TO ATTEMPT AND WHY?
I’ve worked in food service, as an ESL English teacher in Japan to adults and kids, and a translator. I would love to do more professional translating work using Japanese, but my language skill level needs to go up a bit more to be completely fluent.

IF YOU COULD MEET ANYONE, LIVING OR DEAD, WHO WOULD YOU MEET AND WHY?
I want to meet Akira Toriyama, the creator of Dragon Ball Z, and tell him how much his anime series influenced my life and my martial arts training.

IF YOU COULD BE ANY FICTIONAL CHARACTER, WHO WOULD YOU CHOOSE AND WHY?
I’m not sure. Fictional characters tend to have really big, nasty problems. For example, Goku from Dragon Ball Z is always having to save the world, gets bloodied and bruised, his wife Chichi is always screaming at him, and he gets killed multiple times (and gets brought back by the magical dragon balls.) My other favorite anime character Naruto has a demon fox sealed inside him and he’s mentally tortured with saving his friend Sasuke who went rogue. I think I live enough of an adventure that I don’t need to be a fictional character. ^_^