One of the most exciting athletes in all of women’s MMA, Kaitlin Young steps back into the Invicta cage for a fourth time on April 5th, at Invicta FC 5.

Never facing anything less than the top of the women’s MMA mountain, Young looks to secure a win against Brazilian knockout artist Amanda Nunes. With a career built off of fighting a who’s who of MMA, Young never disappoints in bringing the action, and April 5th should be no different.

Corey Smith: You started training in Taekwondo at the age of fourteen, before moving over to Muay Thai. What drew you to martial arts as opposed to other forms of competition?

Kaitlin Young: I liked the idea of individual sports, and contact sports always seemed to be much more fun. I also have terrible coordination with inanimate objects, so anything with a ball was out.

CS: One of your reasons for transitioning to Muay Thai and eventually MMA, was that you felt it was less restrictive rules wise. Are there in rules in MMA that you would like changed?

KY: The fact that MMA doesn’t allow 12-6 elbows is ridiculous. You are going to let me knee someone in the face, but you are concerned about which direction my elbow is moving???

CS: Up until recently, you had participated in the most watched MMA program of all time when you took on Gina Carrano on EliteXC Primetime. Any fan will also tell you, your fight with Carrano was the most exciting fight on that card. Is that something you are proud of, being a pioneer?

KY: Yes and no. I was pretty new to MMA when I took that fight. To be honest, I don’t really think of myself as a pioneer. So many others were fighting MMA long before me. A lot of people tell me that the Carano fight turned them on to watching female fights, and for that I am very proud.

CS: When you scroll down your record, it is replete with high level talent. Do you think it is important to always face a high level opponent?

KY: Fighting real fights is something that has been important to me. From a business standpoint, it probably would have been more beneficial to try to “build” my record. Many fighters do this. Look at the combined record of their opponents throughout their careers. Look at how often they are fighting people that have come up a weight class to fight them. Look at how often they are fighting in their hometown, and see if they mostly win via questionable decision. Cherry picking has never been something I am fond of, though I understand it is part of the business. Not all records are created equal.

CS: You’ve mentioned in the past that your losses are important to you. What makes a loss important to a fighter?

KY: If you are able to not let your ego get in the way, you should learn from your losses. Because of this, I think fighting has made me a better person. It forces you to become more introspective.

KY: Losing lends a helping hand if you are trying to figure out who truly supports you as well. I’ve had ups and downs in my career, and have some awesome people in my life that have been there through it all. There are also those who only like to come around for the ups, and there is really no reason to associate with those people.

CS: You have fought at Invicta FC 1, 2, 3, and are scheduled to face Amanda Nunes at Invicta FC 5 in April. How has your experience been with the company? What is it like to have an entirely female MMA promotion to fight for?

KY: Invicta has been an amazing company to work with! I have been to every show at this point, fighting or supporting, and each time they create an excellent event. Invicta is the first promotion to have multiple female weight divisions for the fans to follow, and that leads to more interest in potential match ups. Invicta is the best thing that has ever happened to female MMA fighters.

CS: Invicta FC recently introduced random drug test for it’s athletes. What are your thoughts on steroids and TRT in MMA?

KY: I’m glad they are testing. It is a step in the right direction. If the rules against PEDs aren’t enforced, the clean athletes are essentially being punished.

CS: What has the fan response been to your fights under the Invicta banner in comparison to other organizations?

KY: The fans have been incredible. I have heard others compare them to Japanese MMA fans (who are markedly more respectful than your average group of fans in the US). We are so happy to have them watching.

KY: Well, first of all, KingMo is awesome, so that is a huge compliment. The support from other male fighters has been great. I really have no complaints.

CS: How much do you know about your Invicta FC 5 opponent, Amanda Nunes? And what are you expecting out of the fight?

KY: She has had a pretty visible career, so it isn’t difficult to find material on her. I’m expecting a brawl.

CS: When you aren’t training, what type of things do you enjoy doing? What helps you unwind after a long day of training camp?

KY: I pretty much enjoy sleeping, watching documentaries or stand-up comedy. I don’t like to go out much during camp because I’m usually drained from a hard week of training.

CS: And lastly, MMA is as much a team sport as it is an individual sport. Who would you like to thank?

KY: The MMA team at The Academy is amazing. The daily push to become better, and the support from the team, gets you through those hard days. We have a lot of people fighting regularly right now, so I’m not even going to start naming names. They know who they are J

KY: I’d also like to thank Greg Nelson, Ryan Murray, Robert Brant, Matt Miller, Tom Schmitz, Nik Lentz, and Pat Barry for their coaching in getting ready for this fight in particular.

KY: As always, thanks to Shannon Knapp and Janet Martin for creating an excellent promotion and to all the fans that keep it going! 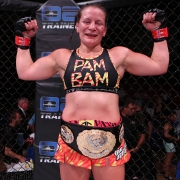 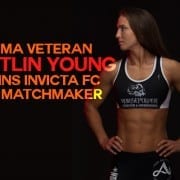