Reshaping herself during the layoff, the new and improved Michelle Waterson steps back into the cage September 6th to defend her Invicta FC Atomweight World Championship against battle hardened veteran Yasuko Tamada.

Corey Smith: Your most recent bout was your upset win over Jessica Penne for the Invicta FC Atomweight title in April of 2013. What have you worked on improving since that bout?

Michelle Waterson: It has been a long layoff, but I was expected to fight in December. In December I started to get myself going for a training camp, but that didn’t end up happening. I just told myself that if I want to be a professional fighter it is something I have to do on a daily basis. I have to improve myself. I worked a lot on my wrestling, and putting muscle on. I had free time and freedom to choose what to improve on.

CS: Your win over Penne was nominated for Upset of the Year at the annual Fighter’s Only awards. What do think it symbolized that women’s bout was nominated?

MW: It was a huge fight. It has always been a goal of mine to obtain the belt, it was tremendous. Plus Jessica Penne was the belt holder, and it allowed me to really showcase my willingness to fight through adversity. There are times in life or in a fight that you can doubt yourself, but as long as you fight through it there is always going to be light at the end of the tunnel. That’s something that I was able to learn, and hopefully that inspired some other people out there after that fight.

CS: What were your first thoughts when you learned of the Invicta UFC Fight Pass deal? What do you think it means for the sport of WMMA in general?

MW: I think if you are going to partner up with anyone in MMA, it would be the UFC. Now we have a big brother looking over our shoulders and taking care of us is how I see it. I think that it’s going to be a good relationship. The sky is the limit with the two organizations, and the only way to go is up.

CS: Your opponent at Invicta FC 8 on September 6th, Yasuko Tamada, is an experienced Japanese veteran on a three fight win streak. How familiar are you with Tamada? What do see as the key to the matchup?

MW: I’m not too familiar with her. I’ve only seen a couple fights of hers, and they were pretty old. I do know that she is a Japanese veteran that will fight anybody. I know that she is kind of an awkward south paw, so for me what I am really focusing on is to try to keep it standing. It’s always a goal of mine, every fight that I go into. With the strength I’ve been able to put on over this past year, and the wrestling if I want to keep it standing I’ll be able to. Those are the keys for me.

CS: With the added muscle mass that you have put on over the past year, have you noticed any differences in the weight cut this time around?

MW: I am heavier than normal, but I am pretty excited to go into the fight with the extra muscle. It will be worth it come fight time.

CS: Other than the weight cut, what do you consider the hardest aspect of being a fighter?

MW: I try not to get too superstitious or too routine, because I feel like every fight is different. So if something doesn’t go right in the routine it would just throw me off. I just go into it with an open mind, and I try to stay in the present. I think that’s a very important thing. I try to just enjoy my fight. We all have that anxiety and those butterflies. If you are able to control that, and harness it for the better I think you are better off. That is what I tend to do on fight day, just get all those emotions under control and use them in the cage.

MW: My husband, Coach Jackson, and Coach Wink have been in my corner for my last couple fights. So I’ve got a pretty rock star corner team. I’m pretty good at just staying in the zone and hearing what I need to hear when I need to hear it. Coach Jackson has always been real good at saying the right thing at the right time. My husband is really good at being there for me and keeping me nice and calm. Coach Wink is the kind of coach that is real up front, and I work two or three times a week with him. He gives me the confidence in myself to just go in there and give it my all because of all the work we put in before the fight even starts.

CS: For those that have not experienced it, how would you describe the walk out to the cage?

MW: That’s the worst part of it all! You are basically walking into the cage, where they are going to lock you in with this other person. This other person is trying to take your head off, and there isn’t anywhere for you to go. To me the anticipation is always worse than the actual event.

MW: I try to watch all my teammates fight. If there is a show that is going on free TV, I will try to catch it. My husband is a big boxing fan, so between boxing and MMA something is always on in our house. We enjoy just watching it, and forgetting about it after we watch.

MW: We go to the park a lot, and just hang out. Sometimes we will just sit down and do little art projects. Play tea cup or play Ninja Turtles. It really just depends on the type of mood my daughter is in.

MW: I want to thank primary sponsors; AmericanaMMA who sells my signature T-Shirt, if anyone else wants to be on Team Hottie!

MW: Onnit Supplements and SportsFood.Com. I have tons of others, and they will be on my banner.

MW: If you don’t subscribe to UFC FightPass, you better! This show is going to go down in history and you will be sad that you missed it! 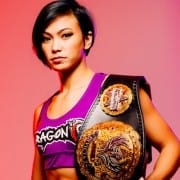 Michelle Waterson: Looks Can Be Deceiving