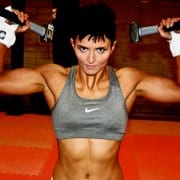 The promotion has signed Ireland’s Catherine Costigan (5-0) to compete in the 105-pound division. The 35-year-old has secured four of her five wins via submission, including an armbar finish of Noelia Molina in her last outing.

“I’m excited and determined to fight for Invicta,” said Costigan. “I plan on having the atomweight belt around my waist by 2016.”

Training out of Pankration Kickboxing Academy, the Limerick-based fighter is eager to put on a show for the fans.

“[They can expect] a spectacle of efficient violence and edge of the seat performances,” declared the former national kickboxing champion.

Costigan is anxious to get to work in the Invicta cage in 2015 and has a message for the rest of the women in her division.

“When they enter the cage with me,  they should expect that it’s going to be their hardest fight both technically and mentally.”