The promotion will visit The Hangar at the OC Fair & Event Center in Costa Mesa on Saturday, Jan. 16. The event will stream live and exclusively on UFC Fight Pass beginning at 9 p.m. ET.

Also announced for the event will be another strawweight bout between recently signed UFC veteran Angela Hill (2-2) and veteran striker Jodie Esquibel (5-1). Esquibel will move up from atomweight riding a two-fight winning streak.

The current fight card for Invicta FC 15 can be found below:

Additional bouts for the event will be announced in the coming weeks. Tickets for Invicta FC 15 go on sale starting today at 10 a.m. PT and can be purchased at fightcluboc.tix.com. 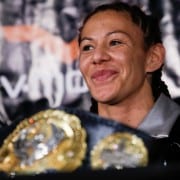