Strawweight title challenger Jodie Esquibel (6-2) has suffered an injury in training and has been forced out of her co-headlining bout against former champion Livia Renata Souza (10-1). Replacing Esquibel will be undefeated Brazilian Janaisa Morandin (9-0). The bout will now be a three-round, non-title affair.

Morandin has reeled off nine straight wins in her home country to open her career, including five by way of strikes. Normally competing as an atomweight, she will move up in weight to take on her countrywoman Souza.

Also, bantamweight Sarah Kleczka (0-0) will make her Invicta and professional debut against Amberlynn Orr (0-1). Kleczka, dubbed “Chucky,” was unbeaten as an amateur and replaces Kelly McGill-Velasco (2-1).

Invicta FC 25 takes place from the Tachi Palace Hotel and Casino in Lemoore, Calif., on Thursday, Aug. 31. All of the action streams live and exclusively on UFC Fight Pass at 6 p.m. PT. 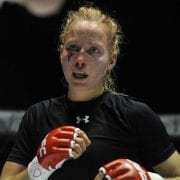