In the night’s main event, strawweight champion Virna Jandiroba (13-0) makes her first defense of her belt against fellow Brazilian Janaisa Morandin (10-1). Jandiroba claimed the title earlier this year, defeating MIZUKI at Invicta FC 28 in Utah. Morandin was most recently in action against Kinberly Novaes at Invicta FC 26, earning a “Performance of the Night” bonus for her victory. 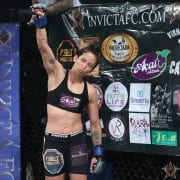