The pair met previously in July, with the Texas fighter Frey edging Finland’s Grusander on the scorecards after five, hard-fought rounds. Frey not only took home the victory, but also the 105-pound belt. The 33-year-old will make her first defense of the title and seek her sixth career win inside the Invicta FC cage. Grusander, meanwhile, aims to regain the momentum she rode into the pair’s first match-up earlier this year. “Brutsku” made her promotional debut in March, defeating Brazilian Fernanda Barros by TKO.

Invicta FC 33 takes place from the historic Scottish Rite Temple. The night’s opening bout between Coates and Kleinbeck will be simulcast on Facebook and UFC Fight Pass. Remaining broadcast details, as well as ticket information will be announced in the coming weeks.

The fight card for Invicta FC 33 can be found below: 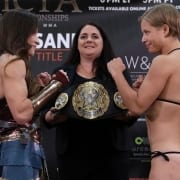 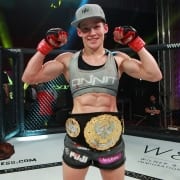