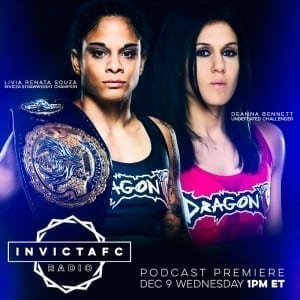 With Invicta FC 15 coming up, Knapp joins the program to discuss the card. She also announces the four additional bouts for the Jan. 16 event in Costa Mesa, Calif. The Invicta FC President also sheds some light on Invicta FC 16, a date, tentative location, and what you can expect from the promotion in the coming year.

Kedzie jumps on board to breakdown what we can expect from the January card including the fights just added. The matchmaker explains what these fights will do for their respective divisions and what you can expect from some of these match-ups.

Invicta FC radio debuts its “Spotlight” feature with Jack Encarnacao. This feature digs deep into the co-main event title fight between champion Livia Renata Souza and challenger DeAnna Bennett. Encarnacao focuses on the story of who these athletes are, where they come from, and what they are truly fighting for beyond the Invicta FC strawweight championship.