Squaring off against fellow newcomer Shannon Sinn, Lee is determined to continue her ascent to the top of the MMA mountain.

Corey Smith: As a waitress at a popular sports restaurant, you were exposed to MMA on a regular basis, which eventually led to trying out the sport yourself. What aspect of mixed martial arts did you first attempt?

Andrea K. Lee: My first area of interest when I began training was boxing. I wanted to compete as quickly as possible so I just focused on one thing in order to get myself ready to compete. I trained for only six months before I had my first boxing match.

CS: You entered into and won the Louisiana Golden Gloves tournament. What was the experience like?

AKL: My first Boxing match was at the 2010 Louisiana State Golden Gloves Championships.  I advanced to the finals to face a girl who had about 10 fights and years of training experience.

AKL: She caught me with my feet together and dropped me with a straight right hand in the first round. I wasn’t hurt, but embarrassed. After I took my standing 8, I came out like a woman possessed and knocked her out in round 2.

CS: Along with the Golden Gloves title, you won multiple Muay Thai titles. Aside from obvious rule differences, what are the main differences between boxing and Muay Thai?

AKL: Shortly after my first boxing match I also began to train in Muay Thai and absolutely fell in love with it. I am a certified Kru Muay and have won national and international Muay Thai titles in the three largest sanctioning bodies in the United States.

AKL: I am also the first fighter to win the Muay Thai Triple Crown by winning the WKA, TBA and IKF titles in the same year.  I left Amateur Muay Thai competition undefeated, a three time world champion and two time North American champion and I was the No 1 ranked Featherweight in the world.

AKL: I enjoy the sport of boxing, but it is so overly officiated its hard for me to feel as though I’m in a “fight” when I’m boxing.  In Muay Thai you get to fight. Clinch, Knee, kick, Dirty box, elbow, Sweep, etc. I feel Muay Thai does a much better job at preparing you for MMA.

CS: Your training schedule attracted attention even in your amateur career. What does a typical training day look like for you?

AKL: My training schedule is hard for a lot of people to believe. Most people think I’m full of it until they come stay with me to train and then they become believers. I train Tuesday – Friday in two separate 5 1/2 hr blocks.

AKL: Training blocks are separated by a three hour lunch and nap/recovery session.  Saturday and Sunday I train one 4 1/2 hour session. My strength and conditioning are done before my training begins in a dungeon that we like to call “The Penitentiary” lol.

AKL: You have to be an animal to survive an hour in that room with Donny.  I train each individual discipline with equal tenacity.  Nothing is left out of my regimen. Boxing, wrestling, Muay Thai, BJJ, Judo and even Kyokushin Karate, all with world class coaches in each respective discipline.

CS: You most recently fought September 19th, roughly six weeks before your Invicta FC debut November 1st. Are you at all concerned about the quick turnaround?

AKL:  The fight only lasted 10 seconds. Somehow I managed to kick her index finger off. Yes, off.  Not quite sure how that happened but it was bizarre to say the least.

AKL:  I took a close look at her finger while the doctor was looking at it and it was only on by a small piece of skin.  The doctor quickly stopped it.

AKL: I was pretty disappointed it ended that way, but I obviously didn’t take any damage in 10 seconds so a quick turnaround fight is exactly what I need.

CS: Your opponent at Invicta FC 9 on November 1st, Shannon Sinn, brings a similar level of professional experience in the ring with her. What do you believe is the key to your matchup?

AKL: I know Shannon is a really solid fighter and I’m certain I’ll get to showcase more of my skill set in that fight.  I believe that Shannon and I are well matched.  I think her stand up skills are good but honestly I don’t think its on my level.

AKL: I know I have the most under rated ground game in WMMA, so I think it’ll be interesting wherever the fight goes. I’d like to stand and bang with her, but at the same time I enjoy a good ground scrap so I’m not going to rely on one skill set.

AKL: My coach says I’m the only fighter he’s ever seen who can nap before a fight. I think I just lack nervousness and that allows me to stay completely relaxed and not get caught up in the moment.

AKL: My husband is my head coach and he and I really connect while he is wrapping my hands.  Some fighters like music while they are getting wrapped but for me I like to listen to his calming voice go over game plan again and again.

AKL: He is the main voice in my corner and I do a pretty good job of listening most of the time. Lol.  One thing that drives me nuts is when coaches lie to their fighters between rounds.  If I lost the round I want to know.

AKL:  If I’m getting hit with something over and over I want to know why and how to fix it. Donny is the most brutally honest corner man in the world.

AKL: Guys in the gym make jokes about it all the time. “Way to stick your chin straight up in the air Dumb***” or “That was absolutely the worst round I’ve ever seen in my life” are things I’ve heard him say, not necessarily to me. If he doesn’t say much you know you’re winning. Lol.

AKL: We watch a lot of MMA but not necessarily for entertainment. Donny will turn a UFC PPV fight into a coaching session.  But I think that as fighters that’s how we should watch the sport, not for entertainment but for preparation.

AKL: I am a full-time fighter. I get one rest day per week. I diet and train with equal discipline. When I’m not in the gym I like to spend my rest day with my daughter.  We are too busy for hobbies so a day by the pool or lake is as much relax time as I get.

AKL: I have sacrificed a lot to get here, friendships, family time, recreation and vacations. I am a woman possessed with a dream and a goal and I won’t slow down until I have accomplished all I set out to do and that is to win world titles.

AKL: My journey in this sport would not be possible without unbelievable people and sponsors who have supported me both emotionally and financially.

AKL: Also to all of the many friends, who have helped along the way, you know who you are and I love you all.

Tickets are on sale via the Ticketmaster link below.

The full card will air live via UFC Fight Pass. Click below to subscribe to UFC FightPass. 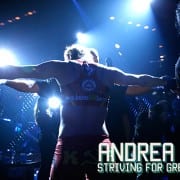 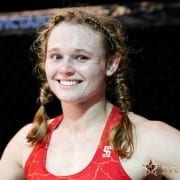