Kansas City, Mo. – Due to a severe case of bronchitis that required hospitalization, Invicta Fighting Championships has announced that Mexican bantamweight Irene Aldana (4-1) has been forced out of a planned match-up with Marion Reneau (4-1) at Invicta FC 10 on Dec. 5 in Houston.

The bout has been rescheduled for early 2015.

Invicta Fighting Championships is a world championship, all-pro mixed martial rts (MMA) fight series dedicated to providing female athletes with a major platform to hone their skills on a consistent basis. Founded in 2012 by longtime MMA executive Shannon Knapp, Invicta is committed to pioneering the future growth of women’s MMA by promoting the best possible match-ups between female competitors and identifying and developing future superstars of the sport. For more information, visit InvictaFC.com, follow Invicta on Twitter (@InvictaFights) and like Invicta on Facebook (Facebook.com/InvictaFights). 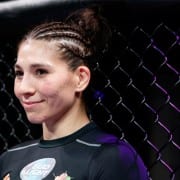 Michelle Waterson: Looks Can Be Deceiving
Scroll to top