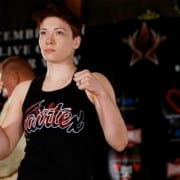 Sports, by their nature, are about the spirit of competition. Yet, the reasons that athletes choose to participate vary greatly from one to the next.

For some, it’s the drive for first place. Those are the same people that race from stoplight to stoplight like their life depends on it. Others seek an outlet from the daily grind, a way to separate from reality, even for a moment.

Then there’s the unexpected success stories. Where an interest turns into a hobby and before long, the hobby turns into a career. This is where you’ll find Finland’s Katja Kankaanpää.

The 33-year-old Invicta FC strawweight champion started her foray into martial arts with karate. Then submission wrestling. And finally MMA. But she never expected to stand atop the 115-pound division.

“My intention was to take just a few amateur fights,” explained Kankaanpää. “But plans changed along the way.

“I didn’t even dare to imagine that I would be fighting at such a high level and be a champion.”

Fighting professionally since 2010, “Killer Bunny” tore through the competition in Europe, earning her a place in the Invicta cage. In her third appearance with the promotion, Kankaanpää was tabbed to compete for the vacant strawweight belt.

The Finn battled opponent Stephanie Eggink into the fifth and final round at Invicta FC 8 last September. Even with the stakes at their highest, Kankaanpää remained calm, cool and collected.

“I had no pressure going to the fifth round. My corner gave me simple direction: just fight, not to give up,” explained Kankaanpää.

“I knew that I had to finish the fight to win. Even if I won the fifth round, I probably would’ve lost by decision.”

In the final round, Kankaanpää ensured there would be no need for the scorecards, submitting Eggink with a D’arce choke and capturing the title.

“It felt amazing,” recalled the champion. “It was something that I couldn’t imagine beforehand. Think I will never feel the same again cause it was something so unique.”

By winning the belt, Kankaanpää became not only the first Finnish title holder in Invicta history, but also the first European to wear gold. Despite the history-making performance, she humbly discounted the achievement.

“There are good fighters from Europe and Finland and I’m one them,” she declared. “When you have a good team behind you, you’re motivated and have high level skills, you will succeed wherever you’re from.

“[I] just want to show that dedication and hard work pays in the end; that I earned my place at the top.”

On Friday, April 24, Kankaanpää will again have the chance to showcase her skills and her hard work. She’ll defend her title for the first time against unbeaten Brazilian Livia Renata Souza in the main event of Invicta FC 12 in Kansas City, Mo.

“She’s a very good opponent for me and will put my skills to the test,” proclaimed the fighter. “I think there are no easy fights at this level anymore. She is very active and will want to submit me, but I’m not an easy win.

“I want to show that I’m the champion.”

Against Souza, Kankaanpää will find herself facing another grappler. It’s a change of pace after facing decorated stand-up practitioners Joanne Calderwood and the aforementioned Eggink in her last two Invicta contests.

“It’s nice to be able to fight against different type of fighters,” said Kankaanpää. “My last two fights have been against strikers and now I get to fight against same type of a fighter as me and I feel very good about it. I’m looking forward to the fight.”

To add to the challenge of defending her belt, the bout with Souza will mark the first time that Kankaanpää will headline an Invicta card. However, the bigger stakes aren’t affecting the champion.

“[There’s] no extra pressure. Actually I’m very excited about it and I’m very honored for this opportunity,” said the Finnish fighter.

“I hope to put up a good fight for all the fans. Hopefully I won’t be in such dangerous situations in this fight that I was in the last one, but hope the fight will be full of action.”

If Kankaanpää’s past fights are any indication, she’ll put on a show on April 24. And like so many aspects of her career, it’ll once again eclipse what she expects to happen.