Costa Mesa, Calif. — On Friday, Jan. 15, Invicta Fighting Championships hosted the weigh-ins for Invicta FC 15: Cyborg vs. Ibragimova, which takes place Saturday, Jan. 16, from the The Hangar at the OC Fair & Event Center. The event will stream live and exclusively on UFC Fight Pass at 9 p.m. ET.

Below are the results of the event’s weigh-ins, which were held at the Team Punishment Gym.

* – Schneider weighed in at 136.4 pounds on her initial attempt. She was fined 25 percent of her fight purse for missing weight 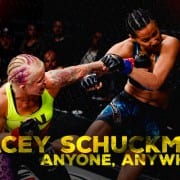