DENVER — Invicta Fighting Championships is returning to the Mile High City for its milestone 50th numbered event on Wednesday, Nov. 16. After an action-packed debut in Colorado in July, the world’s premier combat sports organization for women will once again visit Reelworks Denver with a stacked fight card.

In the night’s co-feature, former bantamweight title challenger Katharina Lehner (7-3) of Germany meets UFC veteran Talita Bernardo (8-4). Lehner will be competing under the Invicta banner for the fourth time, while the Brazilian Bernardo looks to build on her successful Invicta debut in July. Also featured on the card will be a bantamweight bout between Denver’s own “Grizzly” Claire Guthrie (3-1) and undefeated Brazilian Marilia “The Tigress” Morais (3-0).

The event will be overseen by the Colorado Combative Sports Commission and will feature open scoring. The event will be broadcast on AXS TV in the U.S., Fight Network in Canada, and Invicta’s official YouTube Channel and Facebook Page, kicking off at 9 p.m. ET/7 p.m. MT. Tickets to the event will go on sale Friday at 10 a.m. MT through Eventbrite. 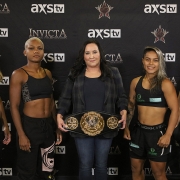 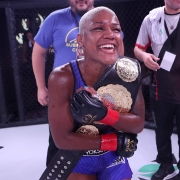