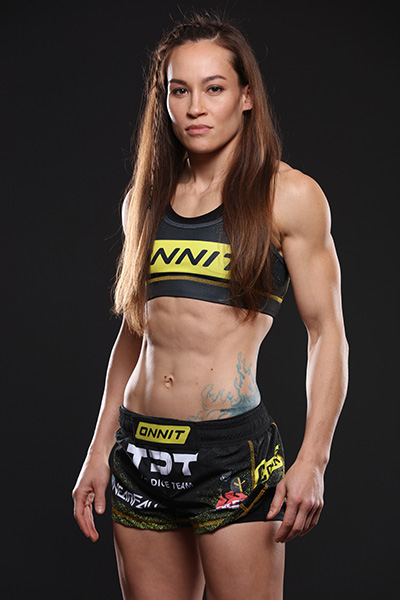 “As an athlete and a person, one of the greatest blessings bestowed upon me is my work ethic. I work hard everyday at everything I do. My internal drive and ambition cannot possibly tolerate mediocrity. It is a constant that pushes me to strive to be the best possible form of myself, and in that, I am truly blessed.”

WHAT IS A TYPICAL DAY OF TRAINING LIKE?
Depends on whether or not I am in fight camp. Outside of camps, things are a bit more relaxed. Generally I warm up, do some technique, and then go live whether it be BJJ, wrestling, or some form of striking. In camp of course the intensity and pace increase. I will usually try to do short strength and conditioning sessions prior to a sport specific workout and usually finish with a short intense conditioning or a run.

WHAT GOT YOU INTO MARTIAL ARTS?
I recall seeing Gina Carano and Julie Kedzie fight on network TV and I think that planted the initial seed. I didn’t even realize women really competed on that level. Some time later, a gym I use to frequent started and MMA program. I finally worked up the courage to try it out one day and I suppose the rest is history.

WHAT PROFESSION OTHER THAN YOUR OWN WOULD YOU LIKE TO ATTEMPT AND WHY?
I’m not quite sure it will be a profession, perhaps more of my next hobby, but I really enjoy the challenge of mountaineering. It is a bit difficult to really focus anytime on it now because I am so busy and there aren’t really any mountains in Texas. I enjoy the idea of incredible challenges and I have found climbing mountains to be incredibly hard sometimes. The mettle and tenacity of mountaineers is unfathomable. I got my start in Scotland when my husband and I climbed Ben Nevis. Then we did the Incan Trail in Peru, and that was days of climbing and trekking through the Andes Mountains. Most recently we attempted to climb Cotopaxi in Ecuador. This was our first attempt at ice climbing. We didn’t quite summit, but it was incredibly hard and I refuse to be beaten by that mountain. Cotopaxi and I have a score to settle in the future. Later this year we originally planned to trek to Everest Base Camp, but with the recent catastrophe there it isn’t possible. But I have a feeling I’ll get there one day and who knows, maybe I’ll give Everest a try as well.

IF YOU COULD MEET ANYONE, LIVING OR DEAD, WHO WOULD YOU MEET AND WHY?
Cleopatra. She walked to the beat of her own drum in a time when women were still largely considered chattel. She was a brilliant military strategist, diplomat, politician, and linguist. Contrary to popular belief, some historians speculate that she wasn’t a great beauty at all. It was her intelligence and charisma that drew people to her.

IF YOU COULD FIGHT ANYONE, LIVING OR DEAD, WHO WOULD YOU FIGHT AND WHY?
Chuck Norris, because if I won all the Chuck Norris jokes by default would have to become Jinh Yu Frey jokes.